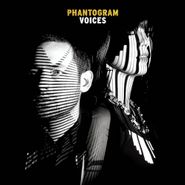 Phantogram have been making great indie-pop releases for some time now, but they’ve never made anything quite as appealing as Voices. They’re one of the few groups to successfully marry indie and hip-hop mentalities, as the Rihanna-esque ey-ey-eys that open “Black Out Days” attest. The beats of “Fall in Love” hit hard as its digitally cut up soul vocals and strings create a dizzying, ecstatic backdrop for Sarah Barthel’s heartfelt vocals, and her delivery verges on rap on the galloping “Howling at the Moon.” Though Voices is remarkably cohesive, the band still can pull some surprises, as bandmate Josh Carter takes the helm for the croony “Never Going Home,” and the awesomely titled “Bill Murray” is as swooning and romantic as the last scene of Lost in Translation. Voices hits that sweet spot where fans of most pop music, from Beyonce to The xx, are going to find themselves swept up in it.


elizabeth.craig94
04/25/2014 I had to listen to the rest of their album after hearing "Fall in Love" on the radio. I was not disappointed! This is a great album with lots of cool tracks, I can listen to it all day long.