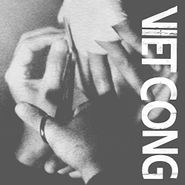 From the ashes of the band Women comes Viet Cong, including that band’s bassist and drummer. Like Women, Viet Cong trade in gleaming, clashing guitars and droning vocal harmonies that seem to hang in mid-air, on tracks like “Bunker Buster.” “Pointless Experience” whizzes around with rocketing guitar riffs that beg to be heard on headphones, while “Continental Shelf” surfs on a New Order-ish bassline and brown waves of grimy guitar noise and leaping vocals. Though Viet Cong can be plenty crowd-pleasing when they want to be, on the new wavey “Silhouettes,” for instance, they’re also unapologetically experimental, though usually with a purpose—if you make it through the punishing industrial pulse of the first half of “March of Progress,” you’re rewarded with a haunting multivocal séance and surprisingly upbeat ending. And on final track, “Death,” the band seems to pay tribute to fallen Women guitarist Chris Reimer, with the kind of expansive guitar exercise worthy of Reimer’s sorely missed talent. Like Women, Viet Cong prefer to say what they need to say and then get out, but it’s always better to leave listeners wanting more. And any post-punk fan will be left wanting a lot more Viet Cong after hearing their dynamic debut.