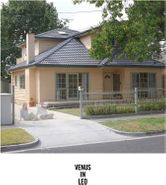 Five years after their last album, 2014’s excellent Psychic 9-5 Club, Melbourne experimentalists HTRK return with the brilliant Venus in Leo. Right off the bat you can tell this record’s a little different from previous outings; there’s more of an underground rock style to these tracks than their usual drugged-out, slithering lite industrial/electronica. The thematic elements are still intact, however, and the vibe is as expected: ennui-stricken, self-destructive, dark, and death-drive-sexy-as-hell. Venus in Leo marks a new direction for the duo of Jonnine Standish and Nigel Yang in the years since the death of their co-founder Sean Stewart and early champion/collaborator Rowland S. Howard — and it’s one you’ll want to revisit again and again.