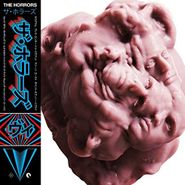 The Horrors continue to evolve on their latest, the excellent synth-pop influenced V. The lads have moved far from their early growling, gritty garage rock, instead amalgamating the fuzzed out swirling shoegaze and fuzzed out post-punk sounds that marked previous albums. The result is V, a wistful, captivating album rooted (unsurprisingly) in melancholy and regret. What makes the new album so interesting is that while hints of more radio-friendly rock emerge on songs that could easily be crossover hits (“Machine,” “Something to Remember Me By”), the band then steers the album back towards an edgier tone of world-weary dark romance (“Gathering,” “Point of No Reply”). V will have longtime fans seeing the band in a new, flattering light and should attract some new admirers, as well.