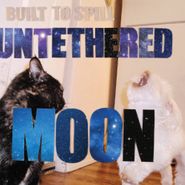 If you thought Built to Spill’s first album in six years would be some somber collection reflecting the band’s elder statesman status, think again. Untethered Moon roars right out of the gate, on “All Our Songs.” Doug Martsch lives up to his indie guitar hero mythos with fluttering space cowboy licks and cosmic solos, singing lines in a creeping whisper that could be self-deprecating or sarcastic, but it’s tough not to feel a thrill when he sings, “rock and roll will be here forever.” “New Zoo” builds on that momentum, as new guns Steve Gere (drums) and Jason Albertini (bass) prove their meddle with a steadily building groove over which Martsch drapes intricate guitar lacework, opening up into an R.E.M.-inspired melody. There’s a sense of futility to Martsch’s lyrics that can be funny at times or a drag at others—one song is called “Some Other Song”—but the irony is that Untethered Moon brims with energy and melodic ideas (for the record, “Some Other Song” is one of the album’s catchiest tunes). However exhausting the journey may be playing with the same band for more than 20 years, it’s clearly refined Martsch’s craft to the point that Untethered Moon feels effortless and powerful.