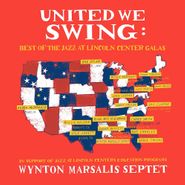 United We Swing: Best of the Jazz at Lincoln Center Galas showcases some of America’s finest musical talents shining bright at one the nation’s most prestigious venues. Combined, the artists featured on the album can count 94 Grammy Awards among them. Headed by the Wynton Marsalis Septet, these one night only performances were recorded between 2003-2007 and have never been released before. It’s a powerhouse display. Some of the biggest names in music — Bob Dylan, Ray Charles, Eric Clapton, John Legend, Natalie Merchant (to name just a few people from the dazzling array of talent here) — dive deep into jazz and blues-inspired performances that weave a rich tapestry of contemporary American musical talent. The result is all killer, no filler.