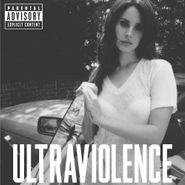 The third album from Lana is the absolute T! Produced by Dan Auerbach (Black Keys), LDR gives us all she has and leaves us soaking wet. Stand out tracks: “Brooklyn Baby” & “Sad Girl.” Lana is the real deal, people.

Grandiose, campy, over-the-top. Lots of descriptors have been lobbed at Lizzy Grant’s Lana del Rey character and her music. With the release of her second full-length, Ultraviolence, we’ll add a few more to the list: strong, consistent and gorgeous. Though it’s far from a perfect record, Ultraviolence gives some fire to the Lana del Rey camp and dampens her detractors who would deride her as a thimble-deep product of the record industry. The album begins with a pair of expansive, powerful slow-burners that sound like Julee Cruise’s reverbed-out, revisionist ’50s ballads blown out to arena-filling proportions. “Shades of Cool,” in particular, is one spine-tingling moment after another. The music, full of Bond riffs, intentionally schmaltzy strings and walls of reverb, threatens to swallow del Rey’s breathy coo, and that seems like the point. You feel overwhelmed along with her. But that shouldn’t imply that she’s a non-presence. Far from it; who else could sell a pair of cheese-whizzed lines like those in “Brooklyn Baby”? (“Well my boyfriend’s in the band, he plays guitar while I sing Lou Reed. I’ve got feathers in my hair, and I get down to beat poetry.”) It’s easy to throw stones at del Rey when you’re not the intended audience, but to kids listening, these seemingly hamfisted references could be crucial. And a song like “Pretty When You Cry” is a self-pity ballad for young sad girls and boys, queer kids and outcasts to sing into the mirror. We need music like that, and to that end, we’ll take Lana over Pink, Britney or any number of divas that came before her. There are some stinkers, particularly on the album’s second half—songs like “Money, Power, Glory” and “Fucked My Way Up to the Top” fall into the same exploitative traps that some of the aforementioned divas fell into, though there’s an undeniable panache to their crassness. But late album songs like “The Other Women,” with its sultry sax and casual confidence, hold your attention even as the album runs long. Ultraviolence ultimately feels like the kind of album Lana del Rey should make, intentionally big, totally entertaining and cool because it tries to be.