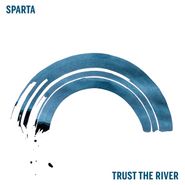 Post-hardcore legends At the Drive-In are like Voltron in reverse: having disbanded in 2001 on the cusp of true alt-rock stardom, the band members eventually splintered into two separate acts. One of those became massively successful prog-rock enterprise The Mars Volta, who quickly eclipsed the notoriety of their predecessor in all but the hearts of punk rock diehards everywhere. The other group was the lesser-known Sparta, who initially seemed poised to better carry the mantle of ATDI into the subsequent millennium, creating volatile yet catchy records in a more “traditional” post-hardcore vein. Yet after 2006’s Thirds, they quietly faded into the background, going on an extended hiatus before eventually returning for a scattered series of live performances. Despite teasing new material, a fourth album continued to elude the ears of fans everywhere.

Trust The River ends the 14 year draught between albums, and Sparta has mellowed out considerably in that time. Fittingly, much of Trust The River sounds far removed from what came before. The roundhouse kick of energy that defined songs such as “Cut Your Ribbon” is replaced with a steady, confidence as the band settles into a more contemplative mood. “Miracle” begins with a Modest Mouse-evoking shimmering guitar riff over shuffling drums, ruminates on “letting go and getting lost” and rides that sentiment into glorious catharsis. “Believe” features a U2-worthy melody on might be the most straightforward pop moment from the band yet. There are still frenzied moments of to be found, however, with early singles like “Cat Scream” and “Graveyard” bringing back the energy that defined the Sparta of the mid-2000s.The latter track especially rips; an utter guitar fest strutting with a bluesy arrogance, it is a modern rock update of Thin Lizzy that is reminiscent of the best cuts from Queens Of The Stone Age.