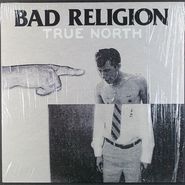 As reviewed elsewhere in the Amoebasphere: Elder statesmen of SoCal melodic hardcore Bad Religion have had a huge influence on a lot of young and old punkers’ lives, and are practically a scene unto themselves. Now in their fourth decade as a band, Greg Graffin and co. are back with their 16th album, and it’s just as sharp and punchy as their ‘80s classics like Suffer and No Control. Brett Gurewitz and Greg Hetson strike the match with speedy, chunky riffs, and Graffin spits mordant political critique on songs like “Robin Hood In Reverse” and “Land of Endless Greed.” As always, it’s electrifying stuff, never more so than on the glorious power pop of “Fuck You” (which kind of sums up their entire career in three hot minutes). They neatly work a little moralizing into their ‘true north’ theme without bumming out the mosh pit, a good trick of Graffin’s that makes them more fun to listen to than Rage Against the Machine. Though no spring chickens, they rock it hard, fast and tight, with plenty of fire and harmony. Our crappy world needs Bad Religion to set things right!