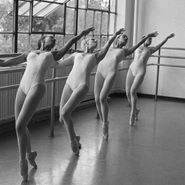 Andy Stott’s latest builds on the moody soundscapes of his excellent last album, the grayscale Faith in Strangers, with an album of songs that are more full-bodied and often unpredictable. After an opening of jarring twists that sounds like a late night spent on Ableton, the most startling thing about the album’s second song, “Butterflies,” is its sheer beauty, full of deliciously woozy synths and a soulful vocal that sounds like it’s coming from a nearby tunnel. Similarly, “New Romantic’s” crystalline tones enliven a deep bass wobble and corroded beat. Still, Stott loves to keep things unsteady, as “First Night’s” foreboding tones, “Forgotten’s” dive-bombing synth notes and “Selfish’s” militaristic beats and chopped up voices pull the rug out from under you. It seems like he’s just messing with you when he follows that up with “On My Mind,” which is laden with a catchy synth-funk line and airy sensuality. Stott succeeds at crossing over beyond the world of dub and techno because his compositions are always interesting, coming across as engaged rather than fussy. And while Too Many Voices still has plenty of bleak moments, they’re more beautifully rendered than ever. It pulses with blood, even as it oozes dread at the seams.