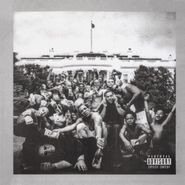 Inspired by a visit Kendrick Lamar made to South Africa, To Pimp a Butterfly is a bold, political showstopper. Lamar looks cultural trauma in the eye on his third studio album while bringing nuance to his lyrics and celebrating the beauty of Black culture. He won five GRAMMY Awards for To Pimp A Butterfly, including Best Rap Album, and was nominated for an additional six, including Album Of The Year.