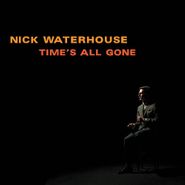 Waterhouse creates the best early ’60s sound this side of Mark Ronson, singing with a fervor inspired by Sam Cooke and Little Richard and producing his album to sound like the great analog-based records of yore.


The time is just right for Nick Waterhouse, who shines past his ’60s worshipping brethren by sounding just a little more punk, if still wholly in line with his retro aesthetic. Analog recording? Check. Rockabilly licks? Yup. Motown-style horns? You bet. But listen to what he does with it on “Some Place,” which starts with a wail from Waterhouse and puts him further in the mix of the song’s Stax-meets-Nuggets backdrop. The drums stop and start, a saxophone comes in and you realize he’s building it from the ground up, not aping a particular song or artist. Simplicity is the key to Waterhouse’s success, as the calm groove of “Say I Wanna Know” proves more soulful than any number of busier contemporaries, or how the surf-blues surge of “(If) You Want Trouble” stays just shy of dirty to keep you locked in, waiting. The subtle sexiness of Time’s All Gone will win a lot of hearts, and there’s no telling where a guy who knows his stuff like Waterhouse does will go next.