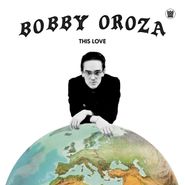 Finnish soul crooner Bobby Oroza is, in fact, a contemporary artist, but you’d be forgiven for thinking that This Love was a long lost relic of exotic soul from the early ‘60s. Featuring a vintage production, nearly devoid of double tracking and utterly slathered in reverb, Oroza’s debut LP would slot in seamlessly amongst any of the dusty rarities that inspired it. Oroza’s smoky sound conjures early Trojan records balladry (his heavy Finnish accent at times almost resembling a Jamaican inflection), East Side Story era Chicano soul and early New Orleans funk. With R&B classicists Cold Diamond & Mink as his backing band, Bobby Oroza’s This Love is an excellent cross-pollination of retro sounds that comes alive through his haunting, otherworldly voice.