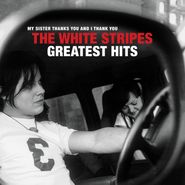 Here's an unexpected gift from The White Stripes, the quirky duo that shook up the world of alternative rock back in 1997, and introduced us all to the prolific Jack White -- a greatest hits album. The "siblings" behind that scrappy hit "Fell in Love With a Girl" went on to win four Grammys and go platinum with 2001's White Blood Cells. The Greatest Hits double album is an appropriately non-obvious set that goes beyond the standard collection of singles, including lesser known tracks like "The Nurse" from Get Behind Me Satan. But the album does wrap up with the anthemic "Seven Nation Army" and kicks off with their very first single, "Let's Shake Hands," just like at their concerts.