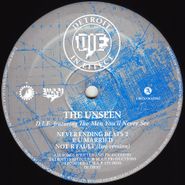 If we didn't suspect Clone had been readying a reissue, we might have thought we would never see 'The Unseen' by The Men You'll Never See (and Detroit in Effect) again. Sorry, we had to write it like that. But the fact remains this had long been the most sought-after title in the D.I.E. catalog, completely marked by the dreamlike "R U Married?" - with its slightly chilling vocal refrain, it's an anthem about love and death in any era. You'll get plenty of play out of the rest, too - some of the best Detroit party electro. Presented with the standard level of Clone polish - essential reissue!