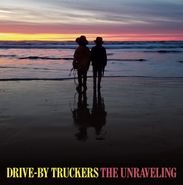 Drive-By Truckers continue the righteous indignation of 2016’s American Band with the tellingly-titled The Unraveling, which takes an uncompromising look at the bleak state of affairs that is America, 2020. Once known for sprawling concept albums featuring detailed characters and stories (hell, this is the band that brought us Southern Rock Opera), Drive-By Truckers have stripped down much of their previous flights of fancy in favor of something much more direct. The blunt lyrics of songs like “Babies in Cages” and “Thoughts and Prayers” make no secret their subject matter or their ire. The Unraveling may be overtly political, but is far from some hollow Woody Guthrie impression. Instead, Drive-By Truckers achieve what is a deeply personal and affecting feat of songwriting, inspired by Patterson Hood’s children and their attempts to comprehend that grim tide of events around them. Just because the subject matter may be heavy, however, does not make the album sound like a dirge. Much in the vein of The Hold Steady, the band plays with a Springsteen-influenced, barroom rock ‘n roll rowdiness -- a drunken party set to sobering words.