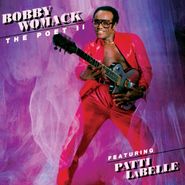 Part two of Bobby Womack's The Poet has just been remastered and reissued to accompany that album's 40th anniversary edition. With its release in 1981, The Poet had already shot Womack back onto the charts, but for The Poet II in 1984, he kicked things up a notch and brought in Patti LaBelle. The legendary LaBelle's guest vocals light up the first three tracks, especially "Love Has Finally Come At Last." Part two also features the funky dance hit, "Tell Me Why."