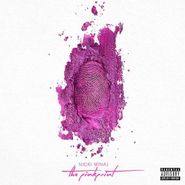 If you thought Nicki Minaj was going to get less confusing, less thrilling, less frustrating or less fascinating on her new release, you were wrong. The Pinkprint is less divided between straight up hip-hop and pop-oriented tracks than the similarly imperfect Pink Friday, whose first third ultimately redeemed the rest of the album. Instead, she’s able to draw up some tracks that do both things quite well, from the sleek R&B heartbreak of “Buy a Heart” and Caribbean-flavored “Trini Dem Girls” to sexually empowering duets with Beyonce (“Feeling Myself”) and Ariana Grande (“Get On Your Knees”). The biggest change here is Minaj’s ability to be direct and personal without relying on jokes or cartoonish delivery. The album’s first three tracks find Minaj reflective after the end of a long relationship, making her heartbreak palpable in some of her best tracks yet. As usual, the singles are either irritating or dumb fun, depending on your mood and outlook, but the rest of Pinkprint is worth sticking around for, particularly a slew of bonus tracks that find Minaj playing faster and looser, closer to the playfulness of her best mixtape and guestwork. Imperfect as she is, you’ll never be bored with Nicki Minaj.