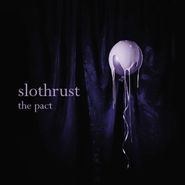 Boston, MA indie rockers Slothrust release their 4th album, The Pact, a joyride of angst-ridden catchiness rooted firmly in the ‘90s tradition of gritty, distorted power pop. However, this is not to say Slothrust dwell in the past. Just listen to that whistled hook on bluesy lead single “Double Down”; that’s pure 21st century pop prowess right there. “Peach” and “Birthday Cake” both function as excellent examples of alt-rock catharsis, shout-along choruses and all, while “Planetarium” has a speed freak wackiness to it that veers into Reverend Horton Heat territory. Slothrust take all the weird, myriad nuances from the era of maximum guitar volume and minimal song titles and turn it into something wholly modern.