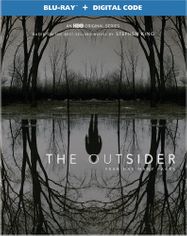 When a young boy's corpse was found in the woods, investigator Ralph Anderson (Ben Mendelsohn) booked teacher Terry Maitland (Jason Bateman) on the basis of DNA and eyewitness evidence. However, witnesses and video placed Maitland in another city at the time of the murder. Anderson's pursuit of the truth, aided by psychic PI Holly Gibney (Cynthia Erivo), winds down some uncanny alleys in this HBO miniseries based on the Stephen King novel. Bill Camp, Mare Winningham, Julianne Nicholson co-star. 10 hrs. On three discs. Widescreen; Soundtrack: English; Subtitles: English (SDH).