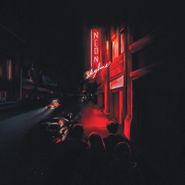 After experimenting with the side project Foxwarren, Andy Shauf has released a new solo album, The Neon Skyline. The catchy title track, which kicks off the album's story of someone reminiscing at a bar about an old girlfriend, immediately brings to mind Paul Simon. This is nostalgic folky rock with impeccable arrangements and soft vocals with an occasional twang. "The Moon" is one highlight, especially during its spare, melodic verses, as well as the pretty, upbeat "Try Again."