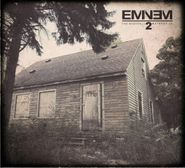 Though it's been only three years since Eminem's last album, Marshall Mathers LP2 can't help but feel like Eminem's comeback record, starting with that title, referencing his biggest and best album, The Marshall Mathers LP, which catapulted the white kid from Detroit into the upper echelon of all-time rappers. From the get-go, Eminem is going full-tilt, digging into some of his most fertile personal topics—his absent father, on seven-minute opener "Bad Guy" and "Rhyme or Reason" (rather hilariously in the latter song, saying "my mother reproduced like a komodo dragon" over a killer Zombies sample); heartbreak on "So Much Better"; and his own general awesomeness, on kick-ass singles like "Survival" and the rapid-fire "Rap God." It's not surprising to find Eminem in "Eye of the Tiger" mode, striving to prove himself once more since his brand of angry-white-guy rap hasn't exactly been hot lately, but the sort of deeply personal storytelling he helped popularize in hip-hop certainly is (hello, Drake). What's more surprising is how great he sounds when he lightens up, too, writing another fun-times track like "The Real Slim Shady" with old-school track "Bezerk." And it's great to hear him team up with the new guard, rapping alongside Kendrick Lamar on "Love Game." Now 41, Eminem doesn't appear to be slowing down any time soon. Hearing him battle once again for the rap throne is a thrill on the triumphant Marshall Mathers LP2.