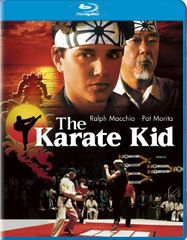 There is more to karate than fighting. This is the lesson that Daniel (Macchio), a San Fernando Valley teenager, is about to learn from a most unexpected teach: Mr. Miyagi (Morita) an elderly handyman who also happens to be a master of the martial arts. So when he rescues Daniel from the Cobra Kai, a vicious gang of karate school bullies, Miyagi instills in his young friend the importance of honor and confidence as well as skills in self-defense, vital lessons that will be called into play when a hopelessly outclassed Daniel faces Johnny, the sadistic leader of the Cobra Kai, in a no-holds barred karate tournament for the championship of the Valley.