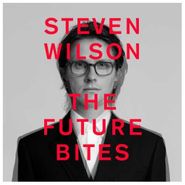 Steven Wilson's professed love for synths and electronics from the '80s is fully on display on his new album, The Future Bites, which stands apart from the prog and experimental music for which he's known. "Personal Shopper" calls to mind the Eurythmics as it openly mocks consumerism and "Eminent Sleaze" is even a bit reminiscent of artists like Phil Collins. The critical themes on this eclectic album may not be subtle, but they're well executed, and "12 Things I Forgot" is a more nuanced ballad with verses closer to Peter Murphy's solo work in their melody and arrangements. Then there's the intriguingly lush and haunting "King Ghost," which could stand all on its own.