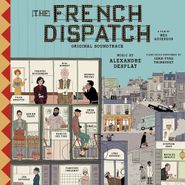 Eclectic and evocative, it’s perhaps no surprise that The French Dispatch Original Soundtrack is every bit as carefully-crafted as Wes Anderson’s latest film. Just as the director builds aesthetically dazzling worlds in each of his films, this enticing collection of songs also casts its own singular little spell. Featuring an original score by Oscar-winner Alexandre Desplat, a cover of Christophe’s French pop hit “Aline” by Jarvis Cocker, and tracks from the likes of Gene Austin, Grace Jones, and Ennio Morricone, listening to this album will transport listeners to the charming, bustling streets of a fictional French city that stands outside of time, a place of imagination and dreams. Here everything is rich in effortless glamour and swooning romance. It’s a place listeners will want to return to again and again.