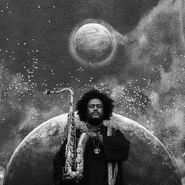 Aptly-named, this 3-CD release showcases the immensely talented and ambitious sax player’s ideas of what Jazz is and what it can be. Complete with lots of musicians playing a number of instruments, as well as chorus singers, The Epic really is just that.


Calling your solo debut The Epic and making it three-LPs long is gutsy, but then again, Kamasi Washington isn’t your everyday musician. The 34-year-old saxophonist and composer crafts a jazz record that is brash, forthright and inventive, all while staying true to jazz tradition. Washington’s skill as a tenor soloist in the Miles Davis/Ornette Coleman tradition has landed him on albums like Kendrick Lamar’s recent To Pimp a Butterfly and he’s toured with the likes of Snoop Dogg and Chaka Khan. But what surprises the most about The Epic is how accessible and listenable it is across its three discs without once aiming for a cheap crossover or diminishing Washington’s talents or sound. On 12-plus minute jams like “Change of the Guard,” Washington goes wild amid his carefully chaotic arrangement of piano trills, angelic gospel runs and cinematic strings. You might have to pause the album to catch your breath after that opener, but digging into The Epic unearths a wide variety of riches. The standup bass and liquid guitar soloing of “Askim” accompanies more stately, beautiful playing from Washington—until he goes much fiercer in the song’s second half, while still remaining melodic. The Epic balances such improvisational explosions with more atmospheric pieces, the organ-led rainfall of “Isabelle” and beatific “Seven Prayers” offering some respite. Vocalist Patrice Quinn appears on a few tracks, including sweet love song “The Rhythm Changes” and lush “Cherokee,” and shuffling Afro-Latin rhythms spice up songs like “Re Run Home.” Washington is happy to lose himself among the layered orchestration now and again, but he remains the star on most tunes, like the remarkable “Miss Understanding,” its grandiose opening giving rise to some of Washington’s best pure soloing, a pleasure to lose yourself in. Along with a handful of interpretations of classics like “Clair de Lune,” Washington’s originals announce him as an unstoppable new force in jazz, one who is able to make the music palatable to hip-hop and indie rock fans without watering anything down. For that alone, The Epic is something to celebrate.