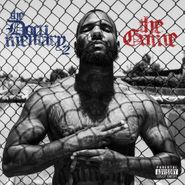 The Documentary was one of the flat-out best hip hop albums of the mid-2000s, a West Coast rap classic with emotionally engaging lyrics and dazzling production from Timbaland, a pre-fame Kanye West and his mentor, Dr. Dre, among others. Tracks like “Hate It Or Love It” helped put The Game into the limelight and West Coast hip hop back on the map. So it makes sense he’d revisit his best work a decade later with this sequel of sorts. With Dr. Dre back at the production helm and Game sounding more energized than he has in years, The Documentary 2 indeed lives up to its namesake. He reminds you of how good his slice-of-life lyrics can sound with the right production on tracks like “100,” with Game sailing on throwback vibes and Drake moving from a drunken chorus to spilling verbiage. And he raps circles around West Coast heir Kendrick Lamar over an Erykah Badu sample with “On Me,” showing ’em he still knows how it’s done. Disc One is out Oct. 9, with a double-disc edition hitting Oct. 16. And check out an LP reissue of the original Documentary Jan. 13!