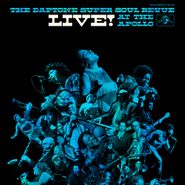 Few recordings really capture the magic of the live experience. The applause sounds like it was pulled from a library of stock sounds, the energy between audience and performer feels depleted, if the listener even thinks of it all. On the other end of the spectrum, there’s The Daptone Super Soul Revue Live! At the Apollo. (You know if anyone was gonna do it right, it was gonna be Daptone!) Featuring dynamic, booty-shaking, foot-stomping performances from legendary Daptone artists like Sharon Jones and the Dap-Kings, Charles Bradley and his Extraordinaires, Antibalas, The Budos Band, The Sugarman 3, and so many more, the album was recorded over three nights in 2014 in front of a sold out crowd at The World Famous Theater in Harlem, NY. High-energy emcee Binky Griptite anchors the proceedings, bringing the fervor and the fever pitch of those nights into your very own home. Turn it up loud and get down! This is what live recordings are meant to sound like.