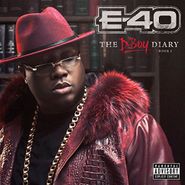 Veteran rapper and entrepreneur Earl "E-40" Stevens continued his seemingly unstoppable prolific streak in 2016 with yet another two new albums (three if you include the Deluxe version) that dropped simultaneously: The D-Boy Diary Books 1 and 2. Three decades into his career, the influential mic spitter and slanguage creator somehow manages to remain a relevant and ever popular figure in the fickle music field. Joined by an impressive list of mic collaborators, that include G-Eazy, Gucci Mane, Lil B, Nef The Pharaoh, Kid Ink, B-Legit, Mistah F.A.B., and Husalah, The D-Boy Diaries offer another healthy serving of slaps from the Vallejo rap icon. - BillyJam, Hollywood