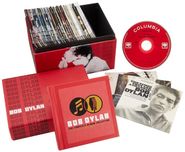 The following 14 titles were newly remastered for this set: Self Portrait, Pat Garrett & Billy The Kid, Dylan, Hard Rain, Street Legal, Bob Dylan At Budokan, Saved, Real Live, Empire Burlesque, Knocked Out Loaded, Down In The Groove, Under The Red Sky, Good As I Been To You, World Gone Wrong.