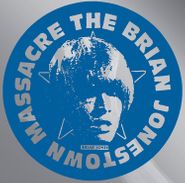 The self-titled record is traditionally regarded as a sort of artistic proclamation; a statement of purpose aimed to sum up that universal essence of a band. It only took Anton Newcombe and the Brian Jonestown Massacre 20 years and 18 studio albums to come up with theirs. For anyone acquainted with the band’s long, strange, and exceptionally acrimonious trip, that statement should come as no surprise: keep it simple, stupid. Regardless of the many sonic avenues and diversions the BJM have explored over the years, at the heart of the band’s sound has always been a predilection for two to three chord songs over a sturdy “Louie Louie” backbeat, with effortless cool and undeniable groove propelling a deceptively straightforward formula. Also, reverb, reverb, and more reverb. In a sense, they’re garage rock heaven personified. The Brian Jonestown Massacre proudly carries on that tradition, and one only needs to look at the track listing for proof: “My Mind is Filled With Stuff” is one of the greatest rock ‘n roll song titles you could ever imagine (no small achievement considering the band we’re talking about), a perfect summation of the grinning silliness and adolescent attitude that the genre is truly about. That’s great for the rest of us, because there’s just about no other way to be in your 50s and still able to make rock ‘n roll that’s worth a damn.