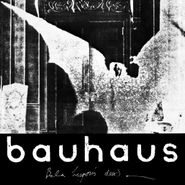 Bauhaus's first studio session in 1979 birthed the highly influential single “Bela Lugosi's Dead” and included four more tracks, two of which were available as B-sides, and two that were never released. The latter two are the interestingly upbeat, “Some Faces” and the driving, punkish song “Bite My Hip,” acommpanied by the sparse “Boys (Original)” and “Harry,” the ska-flavored track about Blondie's Debbie Harry. For the 40th anniversary of their landmark release, all five have been remastered and released together as The Bela Sessions on CD and vinyl, making the full 9-minute version of “Bela Lugosi's Dead” available on vinyl for the first time in 30 years. A treat for goth rock fans everywhere.