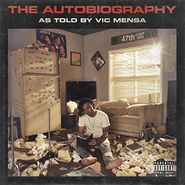 Chicago rapper/singer Vic Mensa, despite steadily releasing material for the past five years and being featured as part of XXL’s freshmen class of 2014, has not quite transferred to a household name in hip-hop. Yet he hasn’t exactly been toiling in the shadows either, having signed to Jay-Z’s Roc Nation in 2015 and being utterly beloved in his home city. Perhaps his prior efforts, excellent though they were, were overshadowed by the media hype behind the city’s once red-hot Drill scene, or the long shadow cast by certified superstar and frequent collaborator Chance the Rapper. So then maybe 2017 is the perfect time for Mensa to release his debut studio album and give us a fully realized and eloquent introduction to the artist’s unique talents. Produced by No I.D., the sonic mastermind also responsible for Jay-Z’s 4:44, Mensa’s The Autobiography is a strikingly personal affair, staying notably true to its title, much more so than other similarly-named hip-hop albums of yesteryear. In the span of 50 minutes, Mensa addresses depression, addiction, infidelity, and violence with an approach that’s often multifaceted and inventive, avoiding cheap platitudes and able to convey many different voices and ideas within the period of a single track. It’s not all drab and dreary, however. “OMG” is prerequisite party track, a giddy banger that wouldn’t sound out of place on Dre’s 2001 or any other Aftermath release from the early 00s, on which Mensa and Pusha T double as disciples of Jay-Z money worshipping, exalting the benefits of a lavish, decadent hip-hop lifestyle. But Vic Mensa, for all his non-posturing and earnestness, has a hint of menace and anger that lurks behind even his most gleeful bars. It’s an attitude that’s lived in, not cultivated, and it helps make The Autobiography the best book you’ll listen to all year.