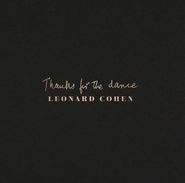 Leonard Cohen offers fans one final, extraordinary gift on the posthumous album Thanks for the Dance. It features nine new tracks, with much of the music written and produced by his son, Adam Cohen, guitar by Javier Mas, piano by Daniel Lanois, and the vocal talents of Feist, Beck, Damien Rice, and a slew of indie world stars. Despite this high-powered galaxy of a collaborators, the arrangements are understated and lyrical, with Cohen’s devastating-as-ever lyrics the real centerpiece of the album. As his gravelly, world-weary voice meditates on sex, death, politics, and spirituality, it becomes clear that each moment of the album is a treasure, as is life itself, as is however many years you personally spent on the same earth as the inimitable Mr. Cohen.