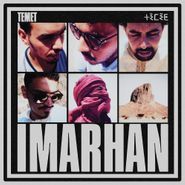 There's no denying that when you think of North African rock, your thoughts automatically go to the Grammy winning band, Tinariwen. But Tinariwen represents the unique sounds of the Sahara and Mali with quiet songs that build small melodies into harmonic mantras. But Imarhan, also part of the same Tuareg ethnicity as Tinariwen and which populates Northern Africa, are less attuned to the sense of universal sadness with hints of political turmoil. Coming from neighboring Algeria gives them a lot more freedom to be more joyful and to experiment being a more modern band. The tradition rhythms of desert folk music are heard all over, but there's enough modern technique to make it sound fresh and distinct. Imarhan isn't afraid of the influence of Latin music in their propulsive drum beats and the guitars that feature as much wah-wah funk bliss as peak Isaac Hayes. Temet, Imarhan's second album allows them to play with the limits of desert rock and to show that their music is influenced by the world around it. The opening track, "Azzaman," shows the effect of our modern era of globalization and shrinking borders with its liberal use of non-tradition forms. As the band themselves put it, "'Azzaman' is about the passing of time and the handing over of a heritage by each generation. It’s about the importance of leaving the right legacy. It’s also about connecting the cultures, the mixing of the old with the new." The opening bass almost sounds like it's coming out of a post-punk track with dense, repetitive rhythms, but suddenly the more soulful edge of the song comes in and transforms it into something more hallucinatory. "Ehad wa dagh" starts off with such an avant-garde guitar riff against African drums, you might be convinced Imarhan is covering the Talking Heads for a second. It's an energetic track with a fierce, bouncy rhythm that bounces with grace. At a brief two-and-a-half minutes, this track demands to be almost immediately replayed to catch all the details, like the strange surf rock guitar solo near the end. If the world of African music always seemed too deep and complicated to explore, Temet might be the best place to start. There's still this taste of Western flavor for those who haven't taken a deep dive, and just enough of the unique sound of the nomadic Tuareg people to make it sound unlike anything coming out of the US.