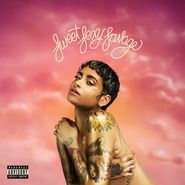 It was only a year-and-a-half ago that Kehlani's mixtape dropped on the the scene. It was an eclectic mix of downtempo R&B with electronic mellowness and production closer to the heyday of TLC. But after "Gangsta" dropped on the Suicide Squad soundtrack last summer, her dramatic, beyond chill style evolved into a more minimal production that feels right at home with Drake's Views. Her sultry delivery and hypnotic performance are perfectly balanced against the grotesque imagery of the blockbuster movie. The title alone, SweetSexySavage, gives you a good idea of what her first album has for you. The album captures the vibe of that slow, sexy, and empowering sound of '90s R&B; music to cry to and music to kiss to. The funkier, lone synth that kicks off "Distraction" feels like a sample from a Zapp & Roger jam with a drum machine beat straight out of 1993. Her performance is powerful and intimidating as she rejects being driven mad by a boy, and instead demands he belongs to her. It's especially brooding coming from her singular voice that's equally tough, deep, vulnerable, and feminine. That urge for lust is all over the album, but no clearer than on "Do U Dirty." Belonging less to the nostalgic sound of the '90s, here she shows her range in the contemporary world of R&B with a louder, more operatic production. The beautiful mood is the perfect balance against the blatantly sexual, over-driven lyrics that feel like a snake slowly wrapping itself around you. It's enough to get you sweating nervously through your headphones! SweetSexySavage is a return to music that's shamelessly carnal and sensuous. Make sure to turn the bass up on this one.