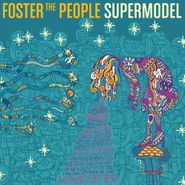 Foster the People blew up with a huge single that lots of people loved (whether they liked to admit it or not) called "Pumped Up Kicks," a song that basically defines radio-ready with its anthemic choruses and hipster digs. Its accompanying album, Torches, was catchy enough, but it was tough not to wonder if they'd be a one-hit wonder. Supermodel silences that notion with a rash of radio-ready jams that put them in the footsteps of bands like U2, The Killers and Coldplay—bands that, to varying degrees, have been able to show mass ambition while maintaining a distinctive personality. Foster the People aren't quite as distinctive soundwise, but as far as hooks go, they've got us covered. The album opens with a few big-ass songs that the band clearly wants to make their follow-up to "Pumped Up Kicks." "Are You What You Want to Be?" has a huge, singalong chorus made for stadiums, but it's also pretty ornately arranged, with shuffling verses and bits of silence, offering a breather before the next big chorus. Mark Foster pushes his vocals to the limit on "Coming of Age," sounding like a Brian Wilson for the autotune generation. But Foster knows that while he's got to grab kids' attention with his pumped-up songs, keeping them from swiping through to another song requires intrigue, and he uses bits of bossa nova ("Nevermind"), synthgaze (the great if terribly named "Pseudologia Fantastica") and, again, Brian Wilson, on the choral songlet "The Angelic Welcome of Mr. Jones," while still crafting impeccable dance-rockers like "Best Friend." If you can't have your cake and eat it too, no one told Foster the People before making Supermodel.