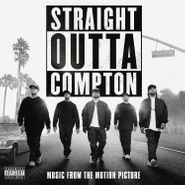 The film Straight Outta Compton tells the story of gangsta rap legends N.W.A., their rise to fame and inner turmoil in one of the best music pics of recent memory. Accordingly, the film’s soundtrack acts as a crash course on N.W.A., its individual members and the sounds that inspired their revolutionary G-funk sound. The album incorporates N.W.A.’s early, upbeat late-’80s jams (“Straight Outta Compton,” “Gangsta Gangsta”) that blended 808 beats, record scratches and the group’s grim, true-to-life rhymes. It also includes early Eazy-E singles, with the rubbery funk of “We Want Eazy” and notorious “Boyz-n-the-Hood.” Bookending those two ends of the N.W.A. spectrum are tracks that influenced the G-funk sound, like the fat, wiggling synths on Parliament’s “Flashlight” and laid-back groove of Roy Ayers Ubiquity’s “Everybody Loves the Sunshine,” and later songs that showed the development of the gangsta rap sound. Early band member Ice Cube is represented by two tracks, including the N.W.A.-dissing “No Vaseline,” and Dr. Dre and Snoop Dogg’s immortal “Nuthin’ but a ‘G’ Thang,” which might be the greatest example of Dre’s production genius. Anyone who saw Straight Outta Compton and is looking to learn what they can about N.W.A. and the development of West Coast rap should start here — or if you’re just looking to own all of these awesome tracks in one place.