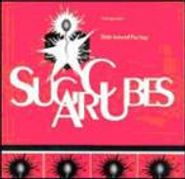 Bjork is one of those artists like Tori Amos that you probably love or hate. I have always loved her since the moment I laid eyes on her. The Sugarcubes released two album in the late 80s. Life's Too Good in 1988 and Here Today, Tomorrow Next Week! in 1989. Stick Around For Joy was the final album for the group released in February of 1992. It remains my favorite probably because it was my first album by The Sugarcubes. It featured "Gold," "Hit," "Walkabout," & "Leash Called Love." Bjork would go on to have a very successful solo career starting with Debut in 1993. I really did fall in love with Bjork & The Sugarcubes. I probably saw the video for Hit on MTV and was hooked on the band after that. I eventually picked up all the Sugarcubes albums and would end up being a long time Bjork fan seeing her live many times over the last two decades. These albums were a big part of my 90s and still remain really fun albums. They were sort of  the Icelandic version of the B-52s. They were weird and wacky. They were what would be know as alternative music.