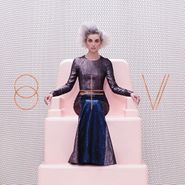 St. Vincent’s absolutely breathtaking new album begins, as Annie Clark’s previous albums have, like some unearthly musical. Clark seemingly touches down from another planet, asking “am I the only one in the world?” on opener “Rattlesnake” amid all manner of alien guitar and strange percussive squelches. “Birth in Reverse” similarly paints a vivid picture, starting with the lines “Oh what an ordinary day …  take out the garbage, masturbate.” “Birth in Reverse” explodes into an extraordinary, paranoid chorus of restless glee. Clark’s way with words has never been more cutting, as on “Prince Johnny,” which manages to be strikingly specific while keeping its deeper existential meaning vague (“Remember that time we snorted/That piece of the Berlin Wall you extorted?” is her best rhyming couplet yet.) Even her ballads bite—“I prefer your love to Jesus” is a thoroughly loaded line repeated on “I Prefer Your Love,” giving depth and conflict to what’s on the surface a beautiful, Kate Bush-inspired love song. Musically, Clark employs everything from decaying choruses (“Prince Johnny”) to hip-hop synths (“Huey Newton”) to Prince-esque atonal funk (“Digital Witness”), but it’s a remarkably cohesive listen, as though each element has been thoroughly considered and sanded down to perfection. As implied by naming her fourth album simply St. Vincent, it’s an album that seems to be about truly knowing oneself—or the thrilling discoveries that come with a lifetime of seeking that knowledge.