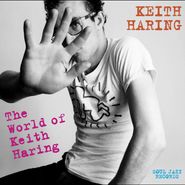 The brilliant curators at Soul Jazz have another hit on their hands with the impeccable Soul Jazz Records Presents: The World Of Keith Haring. Created in tandem with the Tate Liverpool, it’s an aural companion of sorts to the museum’s Keith Haring exhibit — the first major exhibition of the artist’s work in the UK. It’s banger after banger on here, with music selected from the modern artist’s contemporaries, friends, and even his own project (Gray). Expect a flawless mix of the coolest of the cool early ‘80s downtown NYC scene, with rap, punk, disco, art rock, and electro. Fab 5 Freddy, Yoko Ono, The Jonzun Crew, Larry Levan, Talking Heads, Sylvester, Johnny Dynell, Pylon, and The Girls all sound incredibly fresh and forward-thinking; this compilation offers a glimpse into an impossibly vibrant arts and music scene that still manages to stay under the radar.