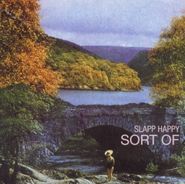 German avant rockers Slapp Happy released their debut, Sort Of, in 1972. The album is relatively tame compared to their later material, with hints of different genres (progressive folk on songs like “Little Girls World” to straight-up Captain Beefheart-ish rock ‘n’ roll on tracks like “Tutankhamun”). No matter what style they seem to follow, the songs are all strong, particularly the tracks “Just A Conversation” and the country-rock tune “Who’s Gonna Help Me Now?,” where singer Dagmar Krause really shines. “Heading For Kyoto,” with its angular and slightly off guitar, is probably the closest the band comes to their trademark avant-pop sound on this album. Although not as spectacular as their follow-up Casablanca Moon, this debut is definitely a good starting for those new to the band.