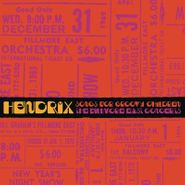 Jimi Hendrix kinda had a knack for playing live, didn’t he? If the triumvirate of legendary Hendrix performances inarguably begins with Woodstock and Monterey Pop, 1970’s Band Of Gypsys might have a solid claim to being his third most important and indispensable live recording. After his original group The Jimi Hendrix Experience had disbanded, the songwriter and guitar legend spent the whole of 1969 both trying to expand his sound beyond the confines and limits of a power trio as well as satiate record company pressure to follow up the immense success of 1968’s Electric Ladyland. On both New Year’s Eve, 1969, and the following New Year’s Day, Hendrix took the stage at Fillmore East with his current lineup, a group based out of the wreckage of the short lived “Gypsy Sun and Rainbows” (aka the Woodstock band) and featuring Billy Cox on bass and Buddy Miles on drums, ironically settling his quest for new sounds with the solidification of another power trio. Six songs were culled from the four performances and released as the eponymous live record, most notably the legendary performance of “Machine Gun.” Now, for the first time, the entire four performances have been made available as Songs For Groovy Children: The Fillmore East Concerts. With the original recordings assembled in sequential order and mixed and restored to the greatest fidelity possible, The Fillmore East Concerts paint the full picture of Hendrix’s exciting live show at the time, reinventing his old Experience favorites alongside his exciting new explorations in melding funk, rock, and psychedelia.