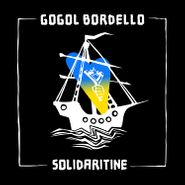 Gogol Bordello’s Solidaritine showcases the band at their genre-crossing best. Whether they’re importing ska rhythms on “Focus Coin” or fusing folkloric fiddle with gritty punk rock “Forces of Victory,” the band creates effective odes to human survival and possibility. It’s an album informed by frontman Eugene Hut’s background as a native Ukrainian, and with award-winning Ukrainian poet Serhiy Zhadan and electro-folk band Kazka appearing on the aforementioned new version of “Forces,” the war the European nation found itself in earlier this year is never far from mind. Produced by Walter Schreifels (Youth of Today, Gorilla Biscuits) and with another awe-inspiring guest appearance from H.R. of Bad Brains, this is one of Gogol Bordello’s most raucous, righteous albums in years.