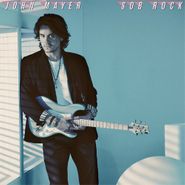 We’ve all been told not to judge a book by its cover. In the case of the retro cool cover art forJohn Mayer’s Sob Rock, however, if you were thinking the singer-songwriter’s latest might be an ‘80s pop and soft rock-inspired outing, you’d be correct. (We know, we know…it’s an album, not a novel!) Sob Rock seamlessly fuses Mayer’s characteristically heartfelt lyrics and absorbing melodies with a winking sense of humor. Album opener “Last Train Home” is heavy on ‘80s atmosphere; it’s a track that’s aware of the silliness of some of the era’s pop bombast while using those same musical techniques to create a total bop. “New Light” takes more of a contemporary angle to its openhearted, catchy-as-hell pop rock, while “Carry Me Away” blends both eras into an earnest little gem of a song. Super fun and thoroughly enjoyable, Sob Rock is guaranteed to put a smile on your face.