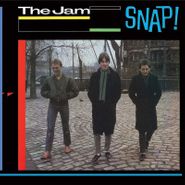 Limited double vinyl LP pressing including bonus 7" vinyl live EP. Snap! Is a greatest hits album by The Jam, released in 1983, one year after the group disbanded. The double-album includes all sixteen of the band's UK singles, plus some B-sides, album tracks and rarities. This set reproduces the original UK release including the limited bonus four track EP, Live, recorded at Wembley Arena during the farewell tour of 1982. Featuring the tracks "Get Yourself Together", "Move On Up", "The Great Depression" and "But I'm Different Now", the EP is notable for the fact that these songs were never re-issued on any other Jam compilation.