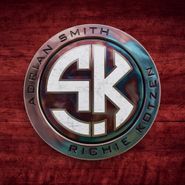 Two guitar heroes, Iron Maiden's Adrian Smith and Richie Kotzen (Poison, Mr. Big), have teamed up for a new project. Smith/Kotzen blends classic rock, blues and '90s alternative - especially since Kotzen's vocals sometimes sound like Chris Cornell's - with melodic hooks and guitar solos. The two artists trade off vocals as effectively as they jam together on guitar. "Taking My Chances" and "Scars" are solid grunge-inspired tracks, but "Running" doubles down on the subtle catchiness of the former and adds an anthemic '80s vibe. Elsewhere "Solar Fire," featuring Iron Maiden's Nicko McBrain on drums, digs into '70s rock and "Glory Road" revels in the blues.