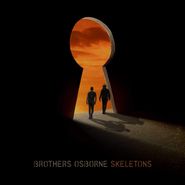 Country rock duo Brothers Osborne have released their third studio album, Skeletons, named after the bluesy, boot-stomping single. That track and the lively "Dead Man's Curve" show the band leaning more heavily on the rock side this time, highlighting TJ Osborne's deep voice and John Osborne's strong lead guitar. But there is pop-country here too, co-written by genre veterans, like the Shania Twain-ready "All The Good Ones Are," and the feel-good, straight-to-the-radio tune, "I'm Not For Everyone."