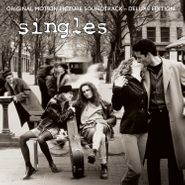 To celebrate the 25th anniversary of Cameron Crowe's Seattle-based, Gen-X romantic comedy, Singles, Sony Legacy has re-released the grunge-filled soundtrack in a deluxe edition, featuring a bonus disc of unreleased rarities and demos of many of the musicians involved with the film. There is, of course, a shocking poignancy to the soundtrack's re-release now that Chris Cornell, a pivotal force in both the grunge scene and in the film's music, unexpectedly passed away two days before the record's release. While the original soundtrack featured songs by both Chris Cornell, and the Cornell-fronted Soundgarden, the deluxe edition's bonus disc also includes 6 more Cornell tracks, including his 1992 EP Poncier, as well as a live Soundgarden cut. Bonus tracks also include demos by Mudhoney and Paul Westerberg, live Alice In Chains, and Citizen Dick, Matt Dillon's fictional band in the film, and their single "Touch Me I'm Dick."