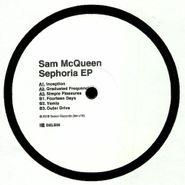 An Amoeba worker once found an unmarked dubplate of this record and became obsessed with finding its source, playing it for everyone within earshot during several long weeks, months, or years. That probably isn't the most profound testimonial, but it at least imparted some importance on this record to anyone who witnessed his/her level of obsession during that time, which ended when someone finally gave him that track i.d. Sam McQueen was in Indio with John Beltran, and the worker thought it might be John Beltran, because it sounds like some of Beltran's best material - floating, liquid, addictive synth hooks and stuttering but intuitive drums. Anyway, pretty lush, incredible 12". Everyone here is buying a copy.